For You, My Friend 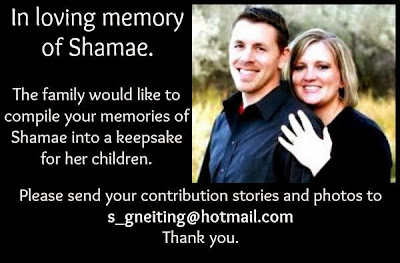 I can not stop thinking of Shamae's three little girls; especially her oldest, Sydney, who is a diabetic not much older than my own.  I hurt for her the most.  A daughter needs her mother; a daughter shouldn't have to go through life without her mother.
And so I found this poem and hope that one day Sydney, along with her sisters, can find peace and joy in their lives.  That's what your mom would want for all of you.

You were my world,
My inspiration and my heart,
But when you left me,
I thought I would fall apart.


You were my best friend,
My one true 'confidante',
And that's not all you were,
You were also my mom.


I didn't want to live without you,
But you would have wanted me to,
And if there's anyone I want to make happy,
That anyone is you


I would have given anything to have you back,
But I know now that it was meant to be,
For you are still watching from up there,
And I know you're watching me.


I'll make you proud mom,
I'm going to fulfill your wish,
You're going to see me and smile,
That's a daughter's promise.


Source: Poem From Daughter To Departed Mother, A Daughter's Promise http://www.familyfriendpoems.com/poem/a-daughters-promise#ixzz2iQB4oZUr
#FamilyFriendPoems
Posted by Megann at 9:17 AM 5 comments:

Another WALK Day come and gone.

Lainey got to cut the ribbon to start the WALK

This year to raise donations, we had a fundraiser at Pizza Pie Cafe.  With their proceeds and our personal donations, we raised $976 for diabetes research.

Lainey helped set up breakfast items for the walkers.

Posted by Megann at 7:41 PM No comments:

Lainey signed up to do the Dexcom CGM study with Rocky Mountain Diabetes Center.  She has to wear these two sensors for 7 days (August 24-31).  She was pretty excited about it all and even got to try the new OneTouch Verio IQ meter.

Posted by Megann at 5:11 PM No comments:

We've now spent our second holiday with the Weeks Family. Shannon kindly invited us to her parents house for games Thanksgiving Day night. Tyson was so excited to see Libby.

We played Bingo and the Candy Bar Game.
It was so much fun!

Lainey and Tyson did a quick blood sugar check before the games began.
Posted by Megann at 7:41 PM No comments:

The Heath Family Team walked in JDRF's 4th annual WALK to Cure Diabetes on September 17. Our team raised over $400 for diabetes research.

I made the raffle poster.

Katy, Natalie, Shannon, and Wendy did an awesome job putting the balloon arch together.

Shamae's cuties: Sydney, Hadlee, and Morgan
Sydney has had diabetes for three years. She and her mom recently went to Washington D.C. to participate in JDRF's Children's Congress.

Anyone want a t-shirt?

I met Brooklyn's mom, Melanie. Brooklyn is four years old and was diagnosed in February.

This team had great shirts!

Lainey getting ready to cut the ribbon.

Team Saylor
We met Saylor and her mom, Jamie, at last year's WALK. Saylor's three years old and has had diabetes for over a year.

On your mark...get set...go!
The girls and I walked the 1 mile portion, and Lainey even ran part of the way. I pretty much held Libby. The wind was not kind to us and it was a little chilly.

Dustin and Libby cheered in the walkers at the finish line.
Thank you Personal Best Performance for donating your floating arch.

We ate at the potato bar for lunch. Thank you Wada Farms!

Some T1 kids had their poster on display for all the participants to see.

The girls got their faces painted afterwards at The Harvest Fest.
Posted by Megann at 11:13 AM 2 comments:

A few days ago we went to an OmniPod informational meeting at Leo's Place. Among eating pizza and playing arcade games, each of us got to wear a demo OmniPod pump. The girls and I wore fake ones, but Dustin wore a real one that had been filled with saline. The insertion is super easy that Dustin said felt like a "light tap". The girls and I also slept with them that night, and it didn't come off when I showered the following morning.

I really like the wireless and tubeless features, but alas, insurance won't pay for it at this time. Lainey had her heart set on getting a new pump, and when I told her we couldn't pay for it she began to cry. It broke my heart! I had a "I hate diabetes" moment, but we won't give up. Lainey will get the pump she wants one day.

The Other Diabetes: LADA, or Type 1.5

This is Lainey's grandpa's 1st cousin, H.J. We met him at a family reunion in July. H.J. was diagnosed with LADA (or Type 1.5 diabetes) when he was in his early 40's.

LADA stands for "latent autoimmune diabetes in adults". Read more about it HERE. H.J. is now insulin dependent.
H.J.'s grandpa (no direct relation to Lainey and me) was diagnosed with type 1 diabetes when he was 16, which was probably in the 1930's or 40's. He lived well into his sixties.
It was interesting to talk with H.J. about his diabetes, and of course Lainey thought it was cool that there was someone like her around.
A statistic on the growth of diabetes: out of the 70 people at our family reunion, 3 had type 1 (or type 1.5) diabetes.
Posted by Megann at 12:48 PM 1 comment:

Dustin volunteered our family to be in the play "Rockwell", a musical about the life of Porter Rockwell. We had play practice every week from March until July. We met a lot of people in our community and made some friends over the months.

Dustin was Porter, and the girls and I were chorus members.

This is Jason.
He and his family were in the play with us and became our friends. Jason and his wife are blind and they have two kids, a boy age 10 and a girl age 8.
It wasn't until July that I found out why Jason is blind. During a break in between scenes, I checked Lainey's blood sugar. Jason's daughter was sitting next to us and said, "My dad has to do that!" I didn't believe her at first and asked their neighbor, who drove them to play practice, if Jason was diabetic. Sure enough! Jason, who is now 36 years old, was diagnosed with type 1 diabetes at the age of four. He went blind at age 19 because he refused to take care of his diabetes.
That same night, while all the cast members were listening to the director's notes, Jason's neighbor came to me and asked, "Your daughter is diabetic isn't she? Do you have sugar? Jason needs it." Luckily I had a juice box in my purse, but by the time I brought it over to Jason it was obvious he wouldn't be able to drink it. Jason was sweating, shaking, and incoherent. His son was shoving chocolate into his mouth saying, "Come on Dad. You need to eat," in a very panicked voice. I asked Jason's wife, who can't see what's going on, if she had his meter or his glucagon shot. She said no.
At that point, I yelled (in a calm voice Dustin later told me), "Dustin! Go home and get the glucagon!"

In a critical moment, I was unprepared. I was out of test strips, and I didn't have the glucagon with me. I had to learn this lesson the hard way unfortunately. I was an emotional wreck! Lainey was crying and I could not comfort her.
It took 10 minutes of waiting for Jason to get a glucagon shot. The paramedics were called, but by the time they got there, Jason's blood sugar had gone from 36 to 120 and he was responding. When asked if he knew where he was, Jason replied, "I'm at the church doing an awful play!" We all had to laugh at that.
This experience was very life changing for me, and I'm grateful that my first glucagon shot didn't have to be on my five year old.
Always be prepared!
Posted by Megann at 12:13 PM 1 comment:

Meeting up with our D-friends

Shannon, Trevor, and kids came to Idaho to visit family...and their D-family. We met at the park and then spent some time together during the 4th of July festivities. My girls love Shannon's kids!

Little Man walked Libby up the hill, helped her on the playground, and pushed her in the swing. Look how they're holding hands! A match made in heaven.

Showing off they're insulin pumps.
Our three diabetics tested their blood sugar at the park. Lainey and Little Man both were at 84! Weird.

Shannon and Megann watching the 4th of July Parade.

Another view of the parade....diabetes style!
We love our insulin pumps and CGM's.
Posted by Megann at 6:16 PM 4 comments:

Our family will participate in JDRF's Walk to Cure Diabetes in September. Check out our fundraising page to make a donation HERE

This Blog is Dedicated to My Daughter

Lainey was diagnosed with type 1 diabetes February 22, 2007, just shortly after her 1st birthday.

Want To Know About Lainey's Diagnosis?

Get In The Know

In the News--Close to Finding a Cure

People You May Know With Type 1

A1C Levels: What is that?